Crack Shot was produced by Allied Leisure in 1972. 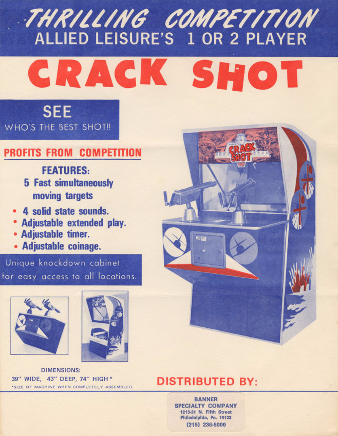 Crack Shot is another image projection game manufactured by Allied Leisure. Crack shot puts you at the trigger of an Anti-Aircraft Gun.  Crack Shot is a one or two player game played against time.  Use the sights of your AA Flack Gun to shoot down enemy planes as they zoom across the screen.  Score enough points and get awarded bonus time!

Crack Shot uses five projection units that pivot horizontally in the base of the cabinet to display the enemy planes in the viewing area.  If either player one or player two connects the circuit to shoot a plane down, the associated projection unit activates a shudder changing the visual image from a white airplane to a red exposition with scatter white plane parts.

Crack Shot was purchased in Beloit Ks out of a storage locker.  It was a chance find.  I picked up the machine and stored it in a friends garage for six months before I had a chance to move it home.

On a summer Friday afternoon I dismantled Crack Shot, loaded it into my F-150 and headed for home.  Shortly after pulling on to I-70 I noticed a dark cloud brewing out of nowhere.  I was six miles from the "BearHouse" in Bunker HIll, Ks and the protection of the fuel awning.  Surely I could make it there before the rain hit.  Wrong,  instantly a micro burst thunder storm cracked open.  Most cars were pulling over due to limited visibility.  I knew I could stop or the game would be totally ruined.  By the time I made it to the safety of the awning, the winds had ripped off the bun mount board and it was dangling over the tailgate being held together by only a wiring harness.

My Heart was broken. The cherry Crack Shot was soaked.  I waited for the rain to subside and dejectedly continued home.

Luckily the cabinet was minimally damaged by the micro burst.  A little bit of repair and Crack Shot is back in business!