Nugget was produced by United Amusement Co. in 1977 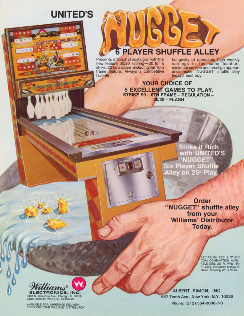 Each game mode is played with tradtional bowling rules except that the scoring rules change with each game mode.

A neat feature of Nugget is the "Beer Frame".  The Beer Frame can be set in the back box for the third, fifth, or seventh frame.   During the pre set frame, Beer Frame is iluminated up in the bottom glass.  It has no effect on the scoring, only to notify the players that they are in the Beer Frame.

Parallel with bowling leagues across the nation, tradtion is that during the Beer Frame, the player who throws the lowest score has to buy the next round of drinks.

Nugget has found its way to Great Bend, Kansas to its new home.  We are getting geared up for a moving Kansas Shuffle bowling tournament. 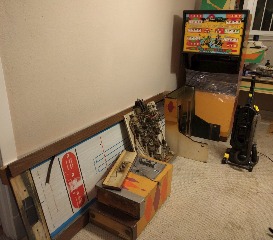 Nugget disassembled to transport.  It breaks down into 5 managable pieces. 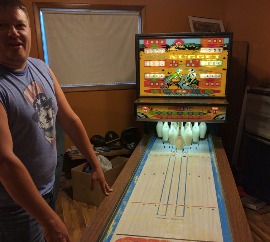 Set up and ready to play!  It's new owner Casey is ready to throw a few pucks.