Sonic Fighter was produced by Allied Leisure in 1971. 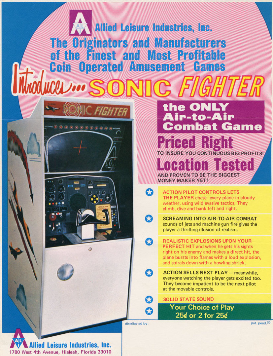 Sonic Fighter is an image projection aerial dog fighting game played against time. One point is scored for every kill with a free game rewarded after eight kills.  Guide the crosshairs toward the ever moving enemy with the yoke and shoot it down with your 30mm cannon!  This game is simple in concept, but rather challenging in reality.

The 1st projection bulb displays the enemy plane on the screen in green.  The plane moves around the screen and barrel rolls away from you during the dog fight.

The 2nd projection bulb displays the tracer rounds firing from your fighter plane.  Once the trigger is engaged the 30mm cannon fires constantly until the barrel overheats.  Once this happens you must wait a period of time before the barrel "cools" before the trigger will activate the cannon again.  Timing your cannon fire bursts is important as you try to line the enemy plane in the crosshairs.  Cannon burst only lasts for a short seven seconds!

The 3rd Projection bulb projects the explosion of the enemy plane once it is shot down.

The incandesant lamps set inside a translucent cylinder with images of clouds printed on it.  As the cylinder rotates around the lamp it generates the image of clouds moving past you that hinder your vision of the enemy plane.