Speedway was produced by Chicago Coin Machine Co. starting in 1969.  Two different models were produced Model A and Model B.  There were some that had a Mark III variation backglass. 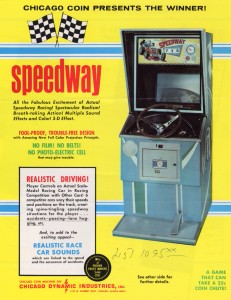 The game consists of 3 projection disks, 1 with yellow cars in the outside lane, another with blue cars in the inside lane and the player controlled background disk.  For every rotation of the background disk the player is awarded 10 points.  The player has approximately 1 minute to collect as many points as possible.  If the player scores enough points, 760 points for my machine, the player is either rewarded a free credit or an extra minute of play.  The position counter is decreased for every 100 points that is scored.

The cabinet is white with an orange and black car and checker flag painted on both sides.  Someone decided that tan was a better color than white on this machine.  The backbox has all the game control relays such as credits, game start, and game over.

The score reels were completely disassembled to replace lamp sockets and repaint white.