Wild Kingdom was produced by Midway Manufacturing Co. in 1971. 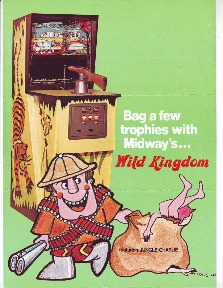 At the start of the game a random high score is selected when the player pulls the trigger for the first time.  A light on the backglass high lights a number from 3000 to 6500 incrimented by 500.  The crocodile, tiger, and elephant each score 200 points when the player hits them. The leapers score 400 for a successful shot. The player has 25 shots to hit as many animals but jungle Charlies shots count towards the 25 total shots.  At the end of the 25 shots, if the player has beat the high score either 15 extra shots are rewarded or a free credit.

The sound was produced from a circuit board that had a different sound for each animal, jungle charlies gun, and the players gun.  Background sounds where produced from an 8-track player.